Simdha Getul Rinpoche on Mount Hépori with view of Samye Monastery in shape of gaint Mandala   Samye (Tibetan: བསམ་ཡས་ , Chinese: 桑耶寺 ) is the first Buddhist monastery built in Tibet where many scholars got together and translated the Buddhist scriptures and canons from Sanskrit into Tibetan. It is also called as “ Pél Samye Mingyur Lhun Gyi Drukpé Tsuk lak Khang ”. Samye Monastery is laid out on the shape of a giant mandala, with the main temple representing the legendary Mount Meru in the centre. Other buildings stand at the corners and cardinal points of the main temple, representing continents and other features of tantric Buddhist cosmology. Simdha Getul Rinpoche infront of the Red Stupa  In corners are 4 chörtens - white, red, green (or blue) and black. There are 8 main temples: ·       Dajor ling in above the monastery of Samye   have go further up, thereaccomplished master Guru Padmasambhava inorder to subdue the evil spirin above the monastery of Samye   have
Post a comment
Read more 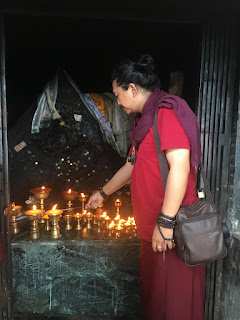 Namo Buddha; Takmo Lüjin where Great Being sacrifice his body to a tigress